There are 4 variants of concern, designated:

SARS-CoV-2 variants if considered to have concerning epidemiological, immunological or pathogenic properties are raised for formal investigation. At this point they are designated Variant Under Investigation (VUI) with a year, month, and number. Following risk assessment with the relevant expert committee, they may be designated Variant of Concern (VOC).

Data on variants of concern is updated twice weekly online. Total case numbers per VOC as of 10 February 2021 are shown in Table 1.

Transmissibility
The VOC 202012/01 (B.1.1.7) appears to have increased transmissibility compared to previously circulating variants and has spread rapidly to become the dominant variant in the UK. Previous transmissibility assessments are available in NERVTAG papers and PHE technical briefings (secondary attack rate).

Escape from natural immunity
Changes in the genome of B.1.1.7 include changes in the spike glycoprotein. Mutation N501Y can result in decreased recognition by monoclonal antibodies that bind this epitope. Deletions in the N terminal domain at residues 69/70, and particularly 144 can results in decreased monoclonal antibody binding. Since convalescent sera and vaccine-derived antisera are polyclonal, these mutations usually do not result in consequential loss of serum neutralization. These mutations could though have large effects on efficacy of monocloncal antibodies used therapeutically if they specifically target these epitopes. 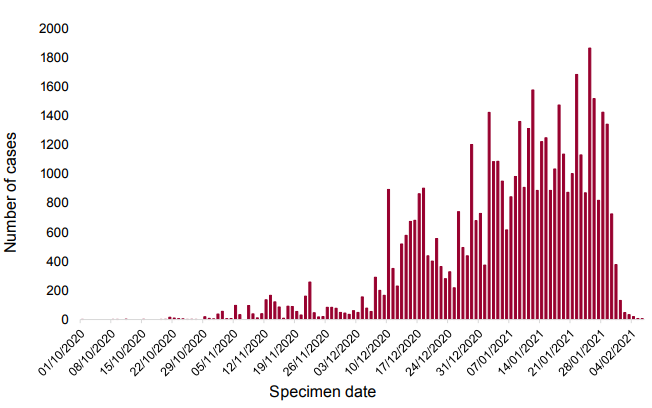 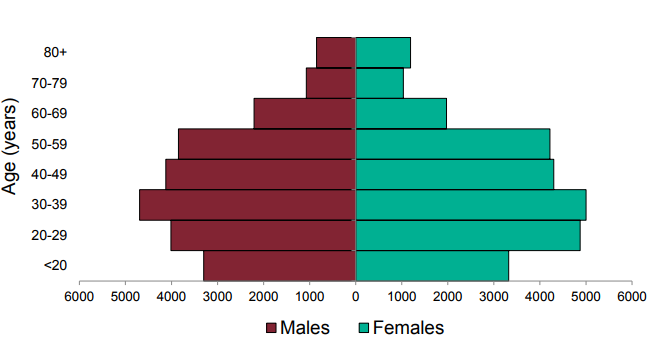 S gene target failure/lineage correlation
The use of S gene target failure in the Taqpath assay as a good proxy for VOC 202012/01 (B.1.1.7) cases has been described in prior technical briefings. This continues to be supported by current data (Appendix 1). In samples tested with this assay in the Lighthouse Laboratories, samples with SGTF have predominated since mid December 2020, reaching 95.0% of cases in the week starting 7 February 2021. Proportions continue to rise by region (Appendix 1).

Cases in individuals who have been vaccinated
Assessment of vaccination data is in process.

Through routine scanning of variation in VOC 202012/01 (B.1.1.7) a small number of B.1.1.7 sequences (33 of 258504 sequences as of 11 February 2021), had acquired the spike protein mutation E484K. Information suggested more than one independent acquisition event and on investigation, this forms one predominant cluster and several separate cases or small clusters. The predominant cluster consists of 17 cases primarily in South West England, 6 elsewhere in England. This cluster was designated VUI on detection and on review re-designated as VOC 202102/02 (B.1.1.7 cluster with E484K) on 5 February 2021.

Genomic and biological profile
The cluster (VOC 202102/02 (B.1.1.7 cluster with E484K)) has the mutations previously described for VOC 202012/01 (B.1.1.7) with the addition of E484K in spike gene, L730F in orf1ab, and A173V, A398T in N gene in all cases. E484K is a mutation of concern with regards to antigenic change and receptor binding avidity, and is potentially more concerning when combined with N501Y. E484K is currently the mutation with most evidence of causing antigenic change. It arises in the presence of convalescent and vaccine-derived antisera. Several independent studies showing the impact of different antigenic variants have concluded E484K is among the single mutations with the greatest impact. Secondly, E484K is associated with increased binding to human ACE2, though it is unclear what impact this has on virus phenotype. Finally, E484K is associated with multiple variants of concern including the B.1.351 and P.1 lineages, as well as being identified as a long-term adaptation in several different immunocompromised patient studies. The other mutations specific to this cluster are not associated with any known phenotypic changes and are not present in other VOCs.

Contact tracing and control measures
Contact tracing is ongoing. Large scale testing in impacted geographies has been implemented commencing on 7 February 2021. Identification of unlinked cases through Pillar 2 is limited by sequencing coverage and time lag of at least 2 weeks between isolation and genomic confirmation. The current number of confirmed cases with this mutation may be underestimated.

Figure 3. Weekly number (bars) and proportion (line) of England Pillar 2 COVID-19 cases with SGTF among those tested in TaqPath laboratories and with S gene detection results (7 September 2020 to 24 January 2021).

Hospitalisations
Of 23 cases, data are available for 18, of which are none were hospitalised following their infection.

Deaths
Of 23 cases, data are available for 18, of which none have died.

Cases in individuals who have been vaccinated
Of 23 cases, data are available for 18, of which 1 was known to be vaccinated before the onset of infection (5 days prior).

Biological profile
This variant has 9 mutations associated with transmissibility and antigenic change, of which E484K and N501Y are most significant. The significance of E484K has been described previously in this briefing. Variants with the combined N501Y and E484K substitutions have been shown to have enhanced ACE2 receptor binding.

Escape from natural immunity
Multiple studies with pseudovirus and live virus neutralization assays indicate a significant loss of antibody binding and neutralization to B.1.351, both with convalescent, as well vaccinederived polyclonal antisera.

Epidemiological profile
B1.351 is dispersed across the UK in low numbers. Confirmed cases are those identified by whole genome sequencing; probable cases are COVID-19 cases without sequencing, but who are contacts of confirmed cases. As of 10 February 2021, there are 126 confirmed cases of B.351.1 and 56 probable cases. For 18 cases, no travel link has been established indicating within country transmission. Identification of unlinked cases through Pillar 2 is limited by sequencing coverage and lag and cases are likely to be an underestimate. 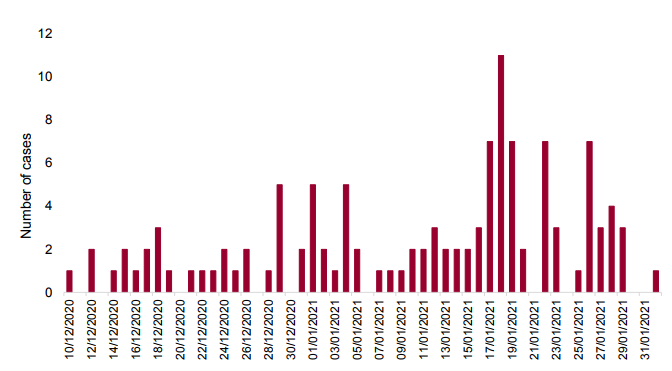 Cases in individuals who have been vaccinated
Vaccination data is being assessed.

International Epidemiology
As of 10 February 2021 there are 40 countries (including the UK) that have reported cases of this variant globally.
As of 10 February 2021 the epidemiological profile in South Africa is as follows:
• The case incidence is continuing to decrease. Currently, the reported weekly incidence is 34.2 per 100,000 population. Weekly test positivity has also been decreasing with current test positivity of 9.7% (testing rates had increased over the period from around 2 per 1,000 population to over 6 per 1,000 population, although have declined slightly over the last 2 weeks to 3.5 per 1,000 population).
• The fatality rate is decreasing (the weekly fatality rate is 3.2 per 100,000 population).
• The number of patients in hospital and ICU has also reduced slightly.
Currently, 1,839 COVID-19 patients are in ICU and 11,618 are in hospital.


Biological profile
This variant has mutations associated with both transmissibility and antigenic change including several in common with the B.1.351 lineage (N501Y, E484K and K417N/T). The significance of E484K has been described previously in this briefing.

Transmissibility
P.1 has been a been identified in Manaus, Brazil which experienced a rapid growth in numbers of COVID hospitalisations. Variants with the combined N501Y and E484K substitutions have been shown to have enhanced ACE2 receptor binding. Increased transmissibility is biologically and epidemiologically plausible, but at this time there is insufficient evidence to confirm or refute this. The frequency of such variants within the Brazilian population is difficult to assess.
Re-infections in healthcare workers have been reported in Brazil.

qPCR/Molecular amplification testing
A pathway is being established by MHRA to provide continued assurance of performance for diagnostic devices in use in the UK. This includes a process of analytical evaluation by PHE and NHSE, where appropriate, to formally test the impact on detection, of variants of concern, by specific products used for clinical diagnostics.

Surveillance of SGTF, as a proxy for VOC 202012/01 (B.1.1.7), is based on positive tests reported by 3 lighthouse laboratories that use the Thermo Fisher TaqPath RT-PCR, and for which CT values are low enough to classify if the S gene is detectable. Specifically, positive tests with CT values >30 for any gene target are excluded. SGTF is defined as a positive test with CT values <=30 for the N and ORF1ab genes and an undetectable S gene. S gene positive is a positive test for which all 3 gene targets (N, ORF1ab, S) have CT values <=30.
Samples with SGTF have predominated since mid-December 2020, reaching 95.9% of cases in the week starting 4 February 2021 (Figure 6). All regions in England have reached >93% SGTF in the most recent week (Figure 7). Total cases detected using the TaqPath assay have also been declining since the first week of 2021, reflecting the general decline in case rates across England.

Figure 6. Weekly number and proportion of England Pillar 2 COVID-19 cases with SGTF among those tested with the TaqPath assay and with S gene detection results (3 September 2020 to 10 February 2021) 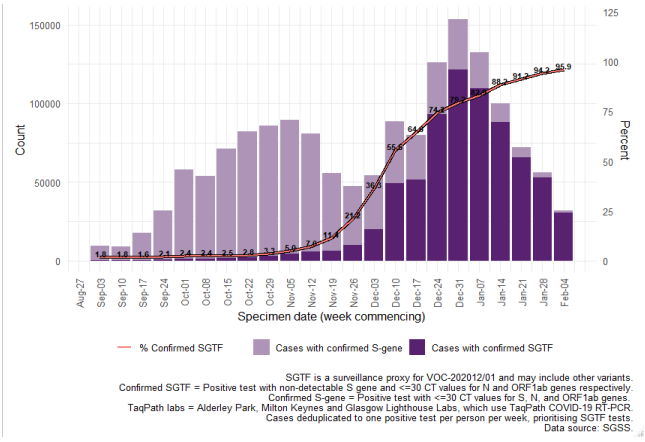 Figure 7. Weekly number and proportion of England Pillar 2 COVID-19 cases with SGTF among those tested with the TaqPath assay and with S gene detection results, by region of residence (3 September 2020 to 10 February 2021) 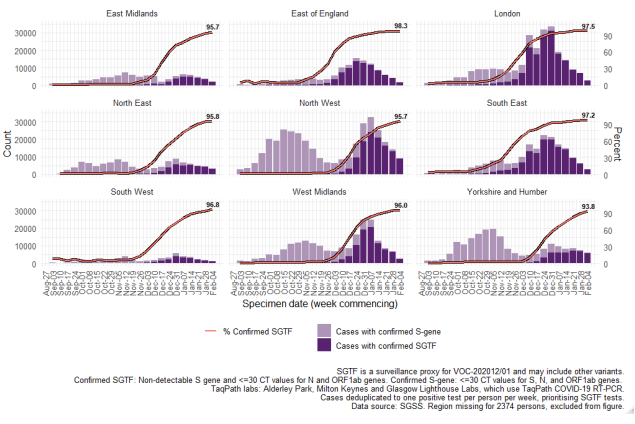 Data on coverage of TaqPath laboratories testing and numbers/proportions of cases with SGTF are shared daily with Local Authorities (Sunday to Friday) on the COVID-19 PHE Local Authorities Report Store (Sharepoint).

To determine if case definitions for VOC 202012/02 (B.1.351) are sufficiently sensitive, an analysis was undertaken. The current definition includes 2 different ‘probable’ definitions, outlined in Table 9. The amino acid and nucleotide substitutions characterising the variant are shown in Table 10

Two data sets were included, the COG-UK genomes, and the GISAID dataset. Analysis with the COG-UK data set identified 110 confirmed UK VOC 202012/02 (B.1.351) genomes. Analysis using the GISAID data identified 463 international confirmed genomes (UK data not included). Table 11 shows the number of sequences in each category when the current probable 1 definition is used (no non-variant nucleotides NVN, sometimes referred to as wild-type, at VOC defining positions) compared to allowing one or 2 NVN calls at any of the positions.

Acknowledgements
The authors are grateful to those teams and groups providing data for this analysis, including: the Lighthouse Laboratories, COG-UK, the Wellcome Sanger Institute, the PHE Epidemiology Cell, Contact Tracing, Genomics and Outbreak Surveillance Teams. 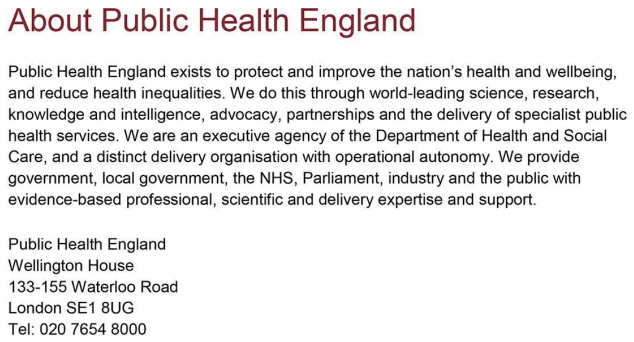