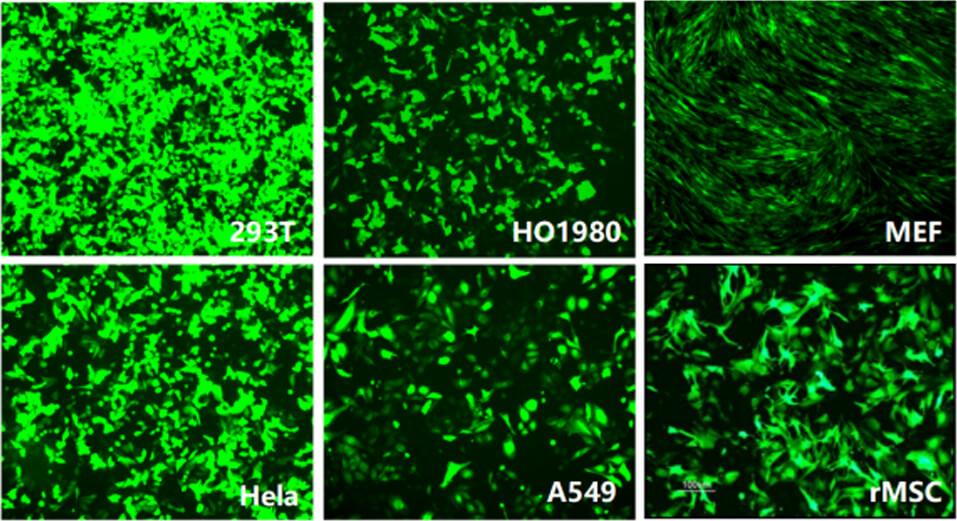 LipoGeneTM transfection reagent is highly potent cationic lipofection reagent that has been shown to effectively transfect plasmids or siRNA, as well as nucleic acid-protein complexes, into cultured adherent and suspension cell lines. Researchers use LipoGeneTM Reagent for siRNA- and shRNA-based gene knockdown experiments, as well as for gene expression studies.

1. Superior performance for co-transfection of siRNA and plasmid DNA.

2. Proven efficacy in the presence of serum—eliminates the need to change media following transfection.

3. Showed no obvious cytotoxicity for most cells without changing the culture medium for 72 hours.

4. Suitable for both adherent and suspension cells and can be used for screening for stable expression of cell lines.

6. LipoGeneTM is very easy to use—simply mix with nucleic acid and add to cell culture.

1. For more information please refer to

2. Can antibiotics be used in media during transfection?
Answer

Yes, antibiotics (penicillin-streptomycin) can be used in the medium during transfection. We have compared transfecting cells in medium with and without antibiotics in multiple cell lines, assessed both the transfection efficiency and toxicity, and found no difference. For certain cell types that are sensitive to transfection or have toxicity issues, omitting antibiotics may improve results, however. For stable transfections, wait at least 48 hours after transfection before adding selective antibiotics.

3. Why would the expression level of my gene in transiently transfected cells be greater than those that are stably transfected?
Answer

4. Can I use the same amount of any transfection reagent for different cell lines?
Answer

The transfection efficiency is highly dependent on the amount of reagent used per well and may be different between reagents. Please consult the product information that is provided with the transfection reagent for optimal use.

5. Can I use LipoGeneTM for transfection of suspension cells, other hard-to-transfect cells, and primary cells?
Answer

Yes, you can use LipoGeneTM for transfection of suspension cells, hard-to-transfect cells, and primary cells.