Introduction: Friedreich ataxia (FA) is a rare, neurodegenerative, autosomal recessive disease, characterized by spinocerebellar and sensory ataxia, including diabetes and cardiac hypertrophy, which is a major medical concern in FA, responsible for 59% of premature death of patients. FA is mainly caused by a (GAA)n expansion within the 1st intron of the frataxin gene (FXN), inducing the heterochromatinization of this locus and transcription reduction. Previously, AAV-mediated cardiac FXN gene transfer demonstrates therapeutic efficiency to prevent and rapidly reverse the cardiac phenotype of FA cardiomyopathy. However, high dose of AAV administration may be not desirable for long term clinical safety, and it is therefore crucial to identify the therapeutic thresholds for the vector biodistribution and expression level in the heart. Recently, one research team in the Institut de Génétique et de Biologie Moléculaire et Cellulaire (IGBMC), at the Department of Translational Medicine and Neurogenetics, Illkirch, has addressed this critical question. They identify the biodistribution thresholds and the underlying mechanisms of cardiac gene therapy in FA and offer guidelines for the development of the clinical administration paradigm. 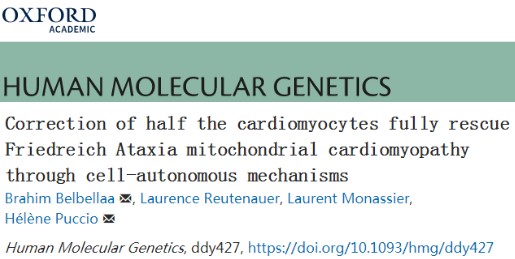 On December 13th, the result was published in the journal of Human Molecular Genetics, titled by "Correction of half the cardiomyocytes fully rescue Friedreich Ataxia mitochondrial cardiomyopathy through cell-autonomous mechanisms". The study identifies the minimum vector biodistribution corresponding to the therapeutic threshold, at different stages of the disease progression and this therapeutic effect was mediated through cell-autonomous mechanisms for mitochondria homeostasis.

To determine the lowest therapeutic dose of AAVrh10-CAG-h FXN-HA upon early or late cardiac dysfunction, the Mck model, a conditional knockout (cKO) model that recapitulates most features of the FA cardiomyopathy was utilized. To investigate the effect of disease progression on the therapeutic outcome, the rescue level of cardiac function was evaluated after decreasing doses of the AAVrh10.CAG-h FXN-HA vector delivery in the FA Mck model at two different time points.

Furthermore, they also aimed to explore the AAV vector pharmacokinetic and pharmacodynamics in the heart. Through correlation and regression analyses, the minimal cardiac biodistribution have been defined, i.e. vector copies per cell (VCN) and percentage of cardiomyocytes rescued, to correct completely or partially the cardiac function. In addition, GDF15, associated with the integrated mitochondrial stress response, was increased in MCK mice with disease progression, which was rescued after gene therapy proportionally to the vector heart biodistribution.

Overall, this paper provides a comprehensive assessment for the successful preclinical development of FA cardiac gene therapy in mouse model, as well as quantifiable therapeutic thresholds for the design of appropriate therapeutic vector and cardiac delivery protocol in large animal model.

References
1. Correction of half the cardiomyocytes fully rescue Friedreich Ataxia mitochondrial cardiomyopathy through cell-autonomous mechanisms
2. Friedreich ataxia: the clinical picture
3. The Subclinical Cardiomyopathy of Friedreich's Ataxia in a Pediatric Population