Virus-like particles (VLPs) are highly structured protein complexes that resemble a native virus capsid ranging 20–800 nm. It is made up of one or more different molecules with the ability to self-assemble and mimicking the form and size of a virus devoid of viral genome and are therefore non-infectious. VLPs in general can be either enveloped or non-enveloped, whereby in vitro assembly typically leads to protein-only shells. Due to the lack of viral genomes, these particles are non-replicative but typically retain the transduction potential of the parental viruses, which may be used for various biomedical applications. Expression and self-assembly of the viral structural proteins of VLP can be produced in a variety of systems, including mammals, plants, insects, and bacteria. Each expression systems have several advantages such as high yield of expressed proteins, post translational modification, formation of multi-protein on the surface of VLP. VLPs have similar characteristics as nanoparticle and have the ability to mediate more biomedical functions through biotechnological methods. Therefore, VLPs have a significant function in drug delivery, genetic therapy, cellular targeting, and cancer treatment.

The basic engineering procedure for a VLP construction consists of three main steps: (A) cloning and expression of VLP in the expression system, (B) purification of VLP, and (C) formulation. The first step in VLP production is to clone the viral structural genes of interest and expressed in different expression systems including, prokaryotic (bacteria, yeast) or eukaryotic (baculovirus/insect cell, mammalian cell and plant). To obtain an intact VLPs it could be purified using ultracentrifugation and ion exchange chromatography. Finally, it will be formulated for biomedical application. 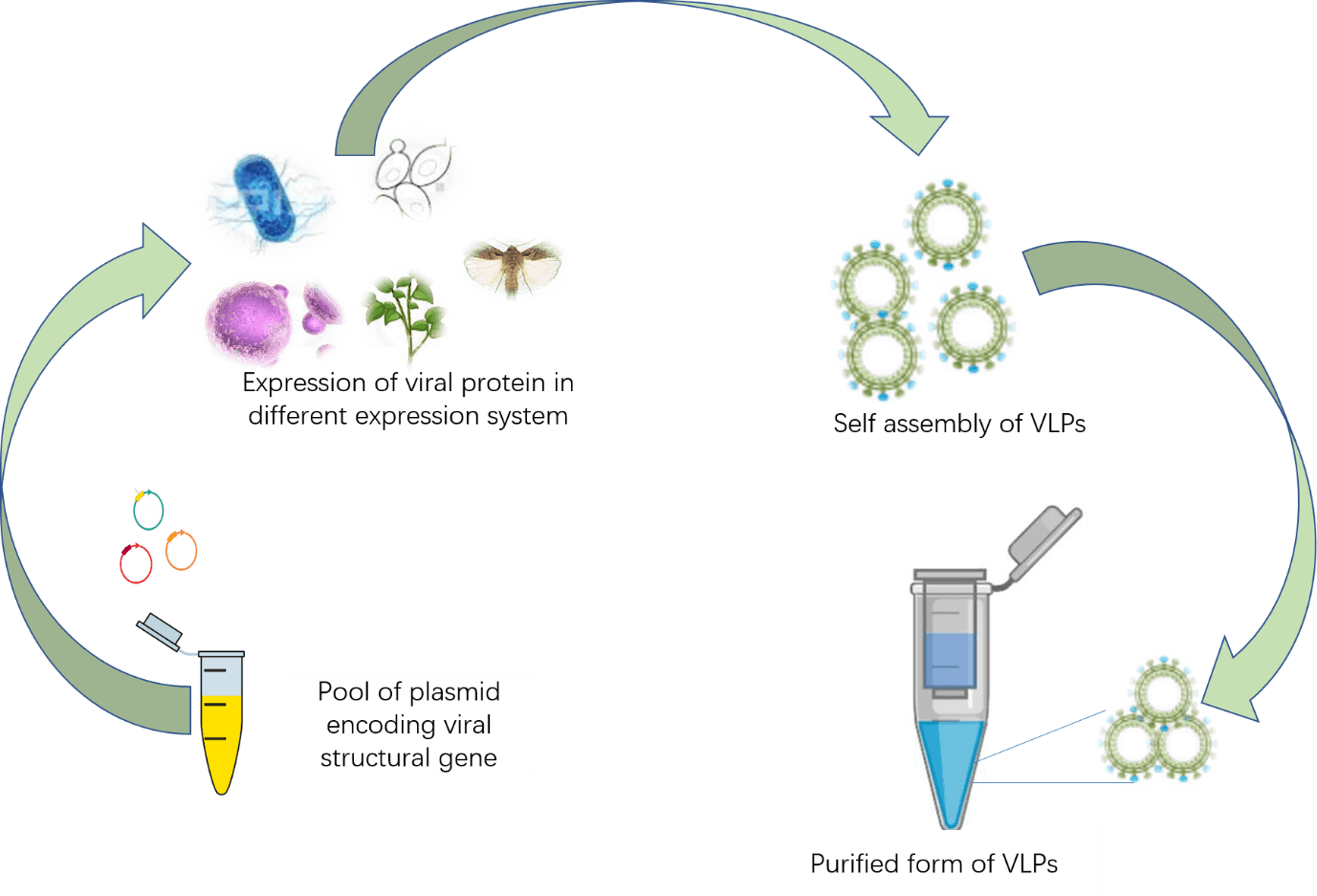 Bacteria are one of the most widely used systems for the non-enveloped virus like particles production. Escherichia coli-based expression system has advantages such as cost-effective, rapid cell growth and high protein expression level to produce safe VLP. However, prokaryotic expression system is not suitable for some protein due to the lack of PTM system. Various VLP vaccines produced by E. coli have been successfully used against infectious and non-infectious diseases.

Yeast is also most commonly used for VLPs production. Saccharomyces cerevisiae and Pichia pastoris, are the widely used yeast expression system. The yeast system has the advantages such as rapid cell growth, high yield, scalability, cost-effective, and PTM process. The vaccines such as Engerix-B (HBV vaccine) and Gardasil (HPV vaccine) produced in yeast system has been approved by FDA.

The B/IC expression system is used to produce both enveloped- and non-enveloped-VLPs. The insect cell lines viz. Spodoptera frugiperda (Sf9/Sf21) and Trichoplusia ni (Tn5) is commonly used for VLP production. Due to its fast growth, it is convenient to produce the vaccines for outbreaks such as influenza virus. It has advantages such as high yield of proteins, complex PTM pathways. The Baculovirus/insect cell platform has been used to develop the vaccine against HIV 1, influenza virus A, Chikungunya virus, severe acute respiratory syndrome (SARS), Ebola virus, dengue fever virus, Rift Valley fever virus (RVFV), Norwalk virus and HCV.

Animal cell expression systems is a valued platforms for producing the structural proteins of non-enveloped and enveloped VLPs. Animal cell platforms are most effective due to its complex and precise PTMs. The animal cell lines such as CHO, baby hamster kidney-21 (BHK-21), human embryonic kidney 293 (HEK293), CAP‐T cell line derived from human amniocytes, Vero 9, and east lansing line-0 (ELL-0) are widely used system for the VLPs production. Among them, CHO has been most commonly used and it has the advantage over other cell lines.


Virus like particles (VLP) as immunogens/antigens of transmembrane protein (TM)

A transmembrane protein (TM) is an integral membrane protein, which are embedded in the cell membrane. The transmembrane region, which directly interacts with the phospholipid bilayer and act as gateways to transport of specific substances across the membrane through signal pathways and cell metabolism. They regularly endure significant conformational changes to move a substance through the membrane. TM are highly hydrophobic, which aggregate and precipitate in water. TM has been classified as alpha-helical or beta-barrels and topologically as single-pass or multi-pass molecules with orientation of N and C terminus. several diseases are related to the function of TM. Hence, the full-length TM with their structural moiety is need to be produced. VLP based platform of GeneMedi produce the recombinant TM protein on the plasma membrane and carry an intact portion of the plasma membrane along with the membrane-associated proteins from the host cell. Unlike other techniques, Virus like particle-based TM protein involves no mechanical disruption or use of detergents and so the structure and conformation of membrane proteins are intact like native to induce and screen functional antibodies. The concentration of total protein is about 10 to 100-fold higher than other techniques.

The capsid virus like particle technology on transmembrane protein have the advantages such as
1. Production of full-length TM protein with native structure;
2. Higher protein concentration;
3. Higher immunogenicity due to their nano-scale structure:
4. Highly suitable for immunization/ELISA/SPR/BLI/cell experiment/CAR detection.

VLPs are striking agent to deliver drugs, small molecules or nucleic acids due to their biocompatibility, biodegradability and targeted delivery. Different cargo-loading techniques have been used for loading either inside or outside the capsid. Different packaging system has been shown in fig. 2.

Disassembly/reassembly of VLPs or in vitro assembly of purified proteins into VLPs. The in vitro encapsulation of small molecules/nucleic acid depends on the interactions between the capsid proteins of VLPs. Changing the buffer conditions, pH, and ionic strength in in vitro disassembles the capsid and releases the viral genome. Following disassembly, viral capsids are reassembled to encapsulate the desired molecules using buffer exchange methods. VLPs are porous and the materials “breeze” inside and change shape under various conditions to permit the infusion of small molecules into the capsid’s cavity. This technique involves the addition of chelators to remove calcium and magnesium ions from the solvent leading to the formation of 11–13 Å-diameter channels to infuse the small molecules, later, the channels are closed by the addition of ion.

Genetic engineering based in vivo assembly is another technique for the encapsulation of peptides into VLPs. It involves the insertion of peptide encoding gene sequences into the genes encoding the capsid protein. The peptide and capsid protein can be expressed simultaneously or separately and it self-assemble through either in vivo or in vitro.

Besides encapsulation techniques, small molecules can also covalently attach to the VLPs with use of reactive amino acid side chains of the protein structure. Functional addressable groups are principally amines (Lys), carboxylates (Asp, Glu), thiols (Cys), and aromatic groups (Tyr, Trp) on the capsid are utilized for conjugation. The repeated units of protein monomer on the VLP surface are a strong immunogen. Compared to subunit peptides or proteins, epitopes on the VLPs surface have the natural structure to stimulate the B- and T-cell immune response. Moreover, repetitive epitope on the surface of VLPs stimulate the strong adaptive immunity without the help of adjuvants. VLP-based vaccines are safer than inactivated or attenuated vaccines. incomplete inactivation and attenuation might reverse the virus activity and cause infection, but the lack of viral genome in VLP could not cause infection at any time point. In addition, the epitope can be incorporated onto the VLP surface through different in-vivo and in-vitro techniques as mentioned above. For example, Qb bacteriophage virus-like particles (Qb-VLPs) have been used as a vaccine for the non-immunogenic week immunogenic antigens. In response to the virus like particle vaccine, the markers such as CD40, CD80, and CD86, on the surface of the dendritic cells (DCs) are expressed and activate the DCs. The activated DCs bind with VLPs through the pattern recognition receptors (PRRs) such as Toll-like receptors (TLR2). Later, VLPs are internalized to the cytosol of DCs and presented to cytotoxic T cells and helper T cells through MHC class I and class II molecules, respectively. Cytotoxic T cells (red triangles) kill pathogens/tumor cells by discharging cytotoxic proteins T helper cells activate cytotoxic T cells by releasing interleukin-2 (IL-2) and interferon gamma (IFNγ). On the other hand, T helper2 cells induce B cells to secrete antibodies (Hasnat et al. 2022).

Drug discovery against infectious disease requires the standard biological assays. The biological assay for viral disease is depends on the infection of cultured cells with virus and observation of its effect by microscopic techniques, viral load quantification using plaque assay, or reverse transcription-PCR. This conventional method is time consuming and limits the screening of large library. Instead, VLP containing luciferase-expressing replicon can be used to infect cells and monitor the antiviral activity through the expression of luciferase (Puig-Basagoiti et al. 2005).