SARS-CoV-2 variants if considered to have concerning epidemiological, immunological or pathogenic properties are raised for formal investigation. At this point they are designated Variant Under Investigation (VUI) with a year, month, and number. Following risk assessment with the relevant expert committee, they may be designated Variant of Concern (VOC). This variant was designated VUI 202012/01 on detection and on review re-designated as VOC 202012/01 on 18/12/2020.

Only a small fraction of all new cases of VOC 202012/01 are identified by whole-genome sequencing, and this data typically lags test date by approximately two weeks, therefore a proxy S gene target failure (SGTF)) is used to indicate carriage of the VOC.

We previously observed that one of the S gene mutations in the VOC, which deletes amino acids 69 and 70 (Δ69-70), causes a reproducible SGTF in the Thermopath TaqPath assay used in three UK lighthouse laboratories (see Technical Briefing 1). This coincidental occurrence therefore provides a good proxy for monitoring trends in VOC 202012/01. SGTF correlates almost perfectly with presence of Δ69-70. Considering 14,950 tested samples where we know both the sequence and the SGTF status, 99.3% of Δ69-70 sequences (1,831 of 1,843) are SGTF, compared to 0.05% of sequences without the deletion (7 of 13107).

Because Δ69-70 has arisen multiple times, and SGTF is a proxy for any lineage with that mutation, the utility of SGTF as a proxy for VOC 202012/01 varies over time and region. Table 2 shows, for all pillar 2 sequences, the weekly proportion of Δ69-70 sequences that were confirmed to be VOC 202012/01. Table 3 shows the proportion of Δ69-70 that is the VOC 202012/01 in England during December, broken down by region. It is, as expected, highest in the areas where the VOC was first observed, but it has been a substantial majority in all areas of England during the month of December. The numbers in these tables are based on sequenced samples, some of which may have come from the same individual (this effect is likely to be small).


The proportion of England specimens tested in the three lighthouse laboratories using the assay which produces the S gene drop out is substantial and relatively constant over time (Figure 1). The proportion of cases tested by this assay which are SGTF has continued to rise in December, in all age groups though most markedly in persons aged 25-49 years. The spatial distribution of SGTF cases shows a relatively higher burden in the South East and London, parts of the South West region and Cumbria.

To note, the low coverage in East of England by the three Thermofisher TaqPath labs precludes any analysis of SGTF burden in that region. There is less confirmatory genomic data in the North West and additional sequencing is being undertaken 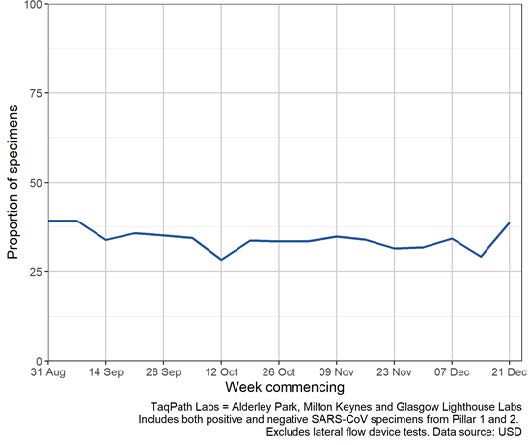 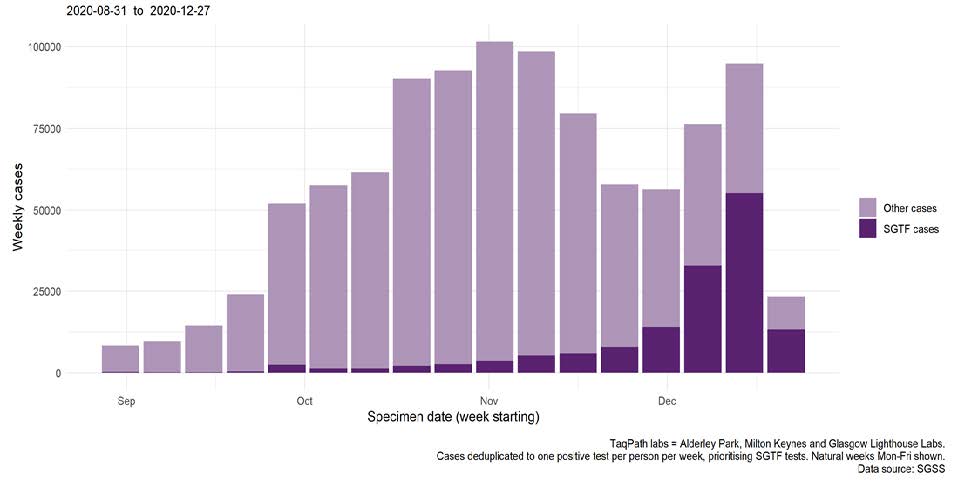 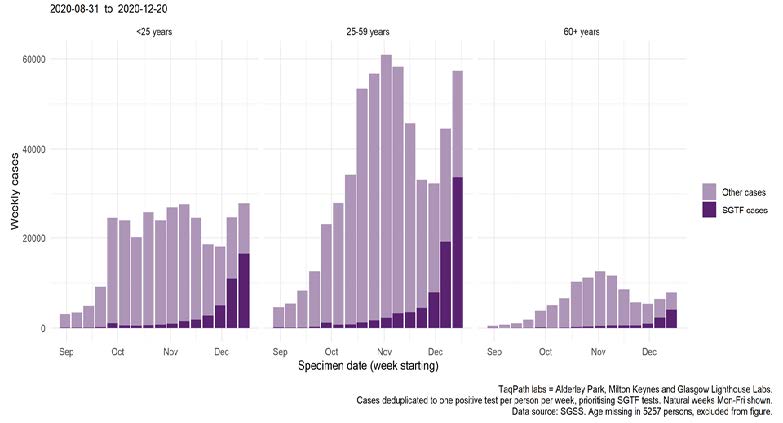 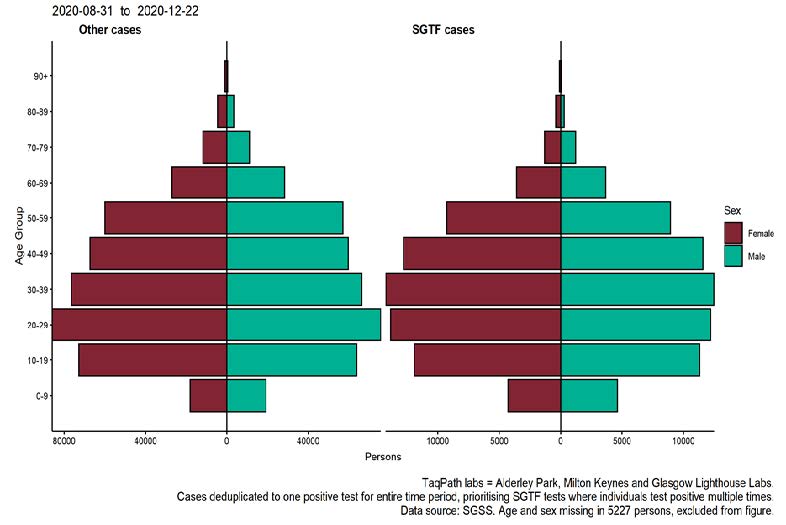 Figure 5. Proportion of COVID-19 cases with SGTF among cases tested by laboratories using Thermofisher TaqPath, by S-gene detection (14 to 20 December 2020) 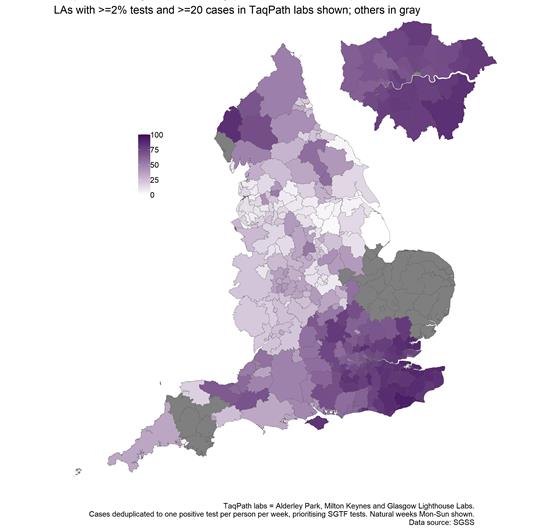 A matched cohort study was undertaken to inform a preliminary assessment of outcomes of hospitalisation and case fatality associated with VOC 202012/01. This analysis of sequenced positive SARS-CoV2 cases used confirmed VOC cases matched to confirmed wild-type comparator cases (classified as distinct to the variant sequence). To optimise comparability of the variant (VOC 202012/01) and wild-type cases and manage the impact of non-random sampling of SARS-CoV-2 cases for sequencing, variant cases were frequency matched to wild-type cases on a 1:1 basis by age group, sex, upper tier local authority (UTLA) of residence and two-week time-period for specimen date.

The comparison of the 3,538 variant and wild-type cases showed that the majority of variant cases were of White ethnicity (75.2%) followed by Asian (10.1%) and Black (5.9%). The ethnic profile of wild-type comparator cases was broadly similar but a higher proportion of Asian ethnicity (13.5% v 10.1%).

The 28-day case fatality was assessed for variant cases and comparator cases.

Laboratory data were used to identify possible reinfections; these were defined as an episode of polymerase chain reaction (PCR) positivity at least 90 days before a recent PCR positive detection. Two reinfections were detected in in the variant case group (1.13/1000 cases) compared to 3 reinfections in the comparator group (1.70/1000 cases, Fisher’s exact P=1.00).

The same definition was applied to SGTF cases. These SGTF cases included samples with orf and N gene Ct values of <31, S gene defined as negative or positive based on presence or absence regardless of Ct value. The rate of detected re-infections in national SGTF cases was 0.60/1000 compared to a rate of 0.61/1000 in non-SGTF cases (P=0.94). When limited geographically to the Kent area, the rate of detected re-infections was 0.51/1000 compared to 0/1000 in non-SGTF cases (P=0.69).

The findings from the analysis of data on SGTF cases showed a roughly similar spatial distribution of cases as observed from mapping of genomic data. SGTF cases were mostly observed in the South East, London parts of the South West regions and Cumbria. This regional variation in should be interpreted in the context of limited coverage in regions like East of England of by the three Thermofisher TaqPath lighthouse labs. However, in regions with relatively high and consistent coverage, the findings can be used as a proxy for the burden of VOC 201212/01 infection.