Introduction: As an excellent gene therapy vector, AAV has been widely used for the treatment of many diseases, such as retinal dystrophy, cystic fibrosis, Duchenne Muscular Dystrophy, Hemophilia. However, post-translational modification of the AAV capsids and how they affect vector activity is poorly understood during the development of AAV vectors into pharmaceutical products. Recently, one research group at the University of Pennsylvania has addressed the extensive capsid deamidation of AAV8 and several other AAV serotypes, with supporting evidence from structural, biochemical, and mass spectrometry approaches. They demonstrate that the spontaneous deamidation of asparagines on the surface of AAV Capsids may influence transduction activity and correlate with the loss of vector activity.

On December 5th, the result was published in the journal of Molecular Therapy, titled by " Deamidation of Amino Acids on the Surface of Adeno-Associated Virus Capsids Leads to Charge Heterogeneity and Altered Vector Function". The study reveals that spontaneous deamidation of asparagines from AAV Capsids is widespread in clinically relevant AAV vectors and impacts capsid assembly and transduction efficiency, thus altering vector function.

Firstly, a wide range of deamidation events was found to be present across asparagine and glutamine residues of the AAV8 capsid (as shown in the following figure), ranging from undetectable to over 99% of individual amino acids being deamidated utilizing structural, biochemical, and mass spectrometry approaches. What’s more, the highest levels of deamidation (>75%) occurred at asparagine residues where the N+1 residue was glycine and the deamidation events were conservative in additional evolutionarily diverse serotypes (AAV9, rh32.33, AAV7, AAV5, AAV4, AAV3B, and AAV1). 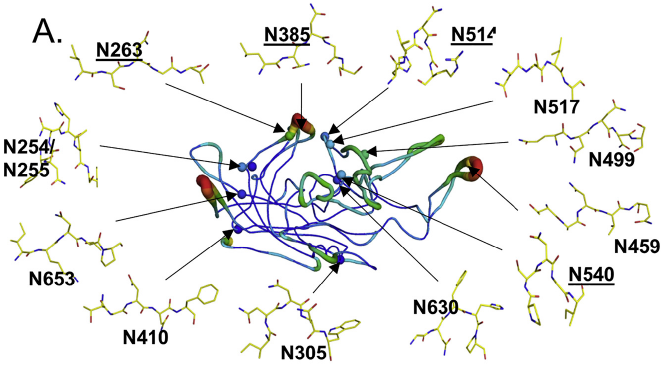 Then, they also found that structural topology, temperature factor, and the Identity of the N+1 amino acid contribute to deamidation frequency. Genetic mutation by substituting asparagine with aspartate rarely affected capsid assembly relative to WT AAV8, but did impact the transduction efficiency. In addition, progressive deamidation was correlated with the loss of AAV vector activity over time, and largely determined by the vector age. Likely, stabilizing NG asparagines can also improve vector activity.

In summary, this paper displays a landscape of deamidation AAVs, beginning in depth with AAV8. They demonstrated that AAV vector deamidation can impact transduction efficiency, which may be potentially a critical factor in the development of all future AAV therapeutics, and proposed strategies to stabilize amides and improve vector performance.

References
1. Deamidation of Amino Acids on the Surface of Adeno-Associated Virus Capsids Leads to Charge Heterogeneity and Altered Vector Function