Receptor for retinoic acid. Retinoic acid receptors bind as heterodimers to their target response elements in response to their ligands, all-trans or 9-cis retinoic acid, and regulate gene expression in various biological processes. The RXR/RAR heterodimers bind to the retinoic acid response elements (RARE) composed of tandem 5'-AGGTCA-3' sites known as DR1-DR5. In the absence or presence of hormone ligand, acts mainly as an activator of gene expression due to weak binding to corepressors (PubMed:12554770). The RXRA/RARB heterodimer can act as a repressor on the DR1 element and as an activator on the DR5 element (PubMed:29021580). In concert with RARG, required for skeletal growth, matrix homeostasis and growth plate function (By similarity).

Interacts with MCL1, BCL2A1 and BAX.

P10826 has binary interactions with 5 proteins 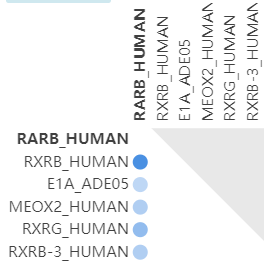